It was the 61st minute as the game was well into the second half when Rumori Calcio’s hopes of turning the game on its head against the tableleaders and group winners, they were smashed by a zlatanesque backheel goal which brought FC Lebo Ülesanne in front again. A few seconds before, Angelo Palmeri’s attempt on target was comfortably saved by the guests’ goalkeeper who saved the day for his side after a couple of blunders helped Rumori come back into the game during first half.

In fact, the evening at Tallinna Ühigümnasium pitch had not started in the best possible way.

Notwithstanding the good defensive act shown by Rumori Calcio, the guests managed to find the goal relatively easily almost immediately as Talimets was left undisturbed to tap in a corner kick after Pähklamägi first attempt went amiss on the first post.

Seven minutes later, Heimar Kalpus seemed to put a word ‘end’ to the game as found the corner from distance with a precise shot.

At this point, it looked quite dire for Rumori Calcio as there were 25 minutes to play and the result was already 0-2 for the guests.

Instead, the hosts, got themselves together and started to put pressure on FCLÜ in order to close the gap.
The good pressure paid off on 12′ minutes when Yaticki served Palmeri in the box. The nr.11 controlled the ball and shot from towards the goalkeeper who let the ball bounce on his right foot and hit the back of the net.
Rumori Calcio was right back into the game with Palmeri hitting his first goal as Rumori Calcio off-field player.

The hosts continued to pressure and create one chance over the other.
They eventually pulled level nine minutes before the half-time whistle when Federico Levi scored his 4th seasonal goal in Rahvaliiga being the second best goalscorer after Joy Verano (5) who was not part of the game on Thursday night.

The first half ended with Lebo trying to re-establish the lead however they found Rumori Calcio’s stubborn resistance. 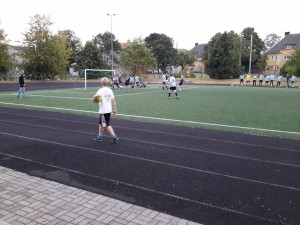 Lebo’s opener with Talimets left alone in the box on the corner kick.

In second half, under floodlights illumination, both teams battled relentlessy having both good chances to hit the back of the net. On the mark we have FCLÜ hitting the same post twice with shots from distance.

This until 61′ minutes when Pähklamägi feat unlocked the deadlock and opened the game for Lebo who had Talimets scoring a personal hattrick in the very last minutes of the game (69′, 70′).

The full-time score is even too penalizing for Rumori Calcio who were even for long traits of the game and played as there was no 10-point gap between the two sides.

Leave a reply Click here to cancel the reply